Doug hates his job, but you’ll enjoy this game. We’ve been working on it for over a year now and we’re delighted to have the opportunity to share it with Xbox gamers. Doug is a mockumentary comedic game inspired by TV shows like “The Office” and “Parks and Recreation.” Granted, it’s a bit of an unusual choice for a game, but we wanted to create something unique. This is the first release from our newly christened Indie Game studio, Super Villain Games. A small family team of African American developer brothers hailing from Detroit, Michigan, who oddly enough actually like their jobs but somehow came up with this game anyway.

In Doug you assume the role of the titular character, just trying to make it through the day with hopes of getting your end of the year bonus. Unfortunately, to accomplish your goal, you’ll have to navigate annoying co-workers, bizarre situations, and a sinister boss that may be trying to get you killed. How you play the game is up to you. You can avoid dangerous situations or plunge fist first into the action. The choices you make decide what happens next. Sometimes you can talk your way out of a fight, therefore it’s important to think about what you say.

Doug Hates His Job is an interactive story that combines various gameplay styles including beat ’em up, 2D platforming, on-rails shooting, trivia, driving, and much more. We wanted to keep the players on their toes and keep them guessing what’s coming next. Will you be attacked by a gang of senior citizens? How about a gun toting showdown with an army of sentient smart printers? And of course, we got the memo every game must have a few zombies, so we threw a handful of them in their too. Anything can happen in this title so players should be prepared.

Don’t worry about learning new mechanics; the controls for each mode are intuitive and gamers will be ready to go in seconds. No excuses. If you’re ready to laugh and experience some random gameplay situations give it a try. Doug may hate his job, but you’ll love it. 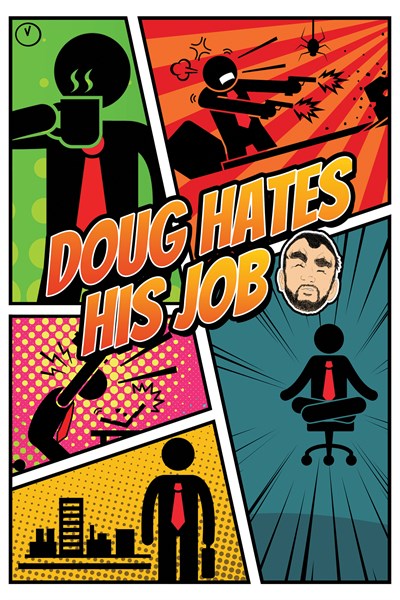 ☆☆☆☆☆
15
★★★★★
Xbox One X Enhanced
Doug Hates his Job is a Beat-Em Up game with an office mockumentary style story about a sales agent who, as the title states, hates his job! Join Doug as he tries to deal with the typical every day office pet peeves. You get to decide how Doug responds to annoying coworkers, crazy clients, and a ruthless boss. Along the way, unlock new levels with several styles of gameplay.