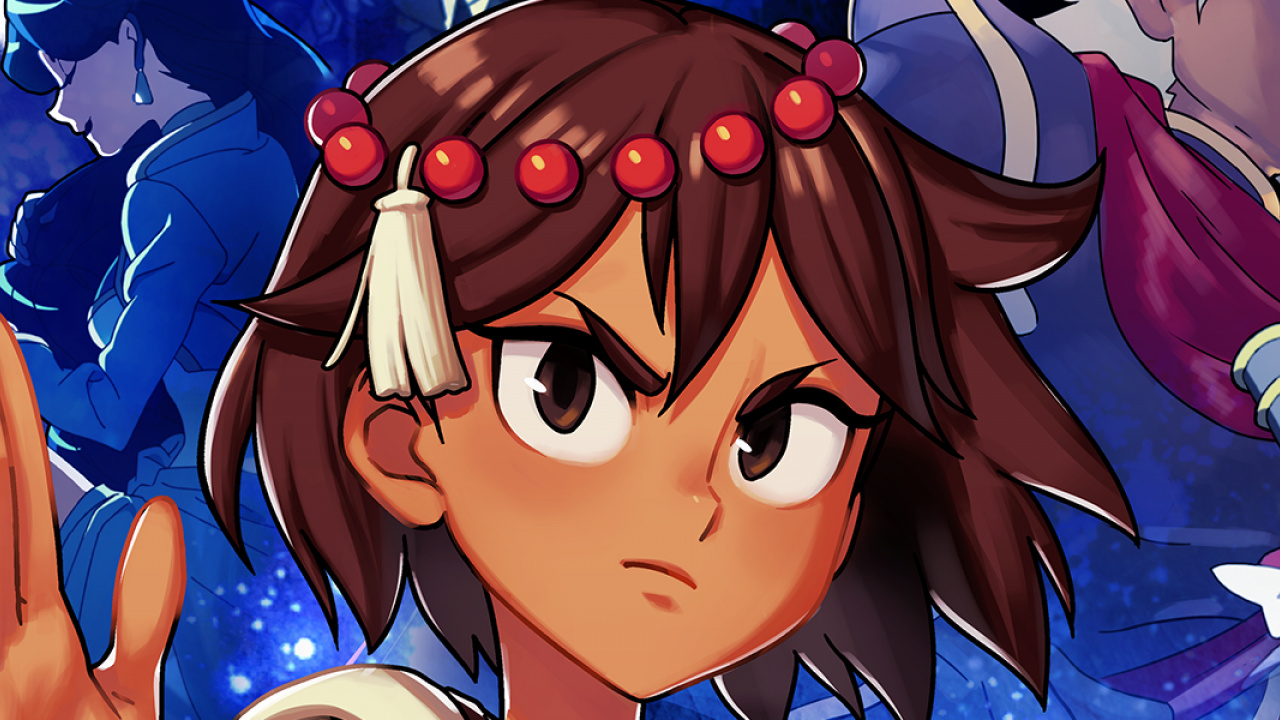 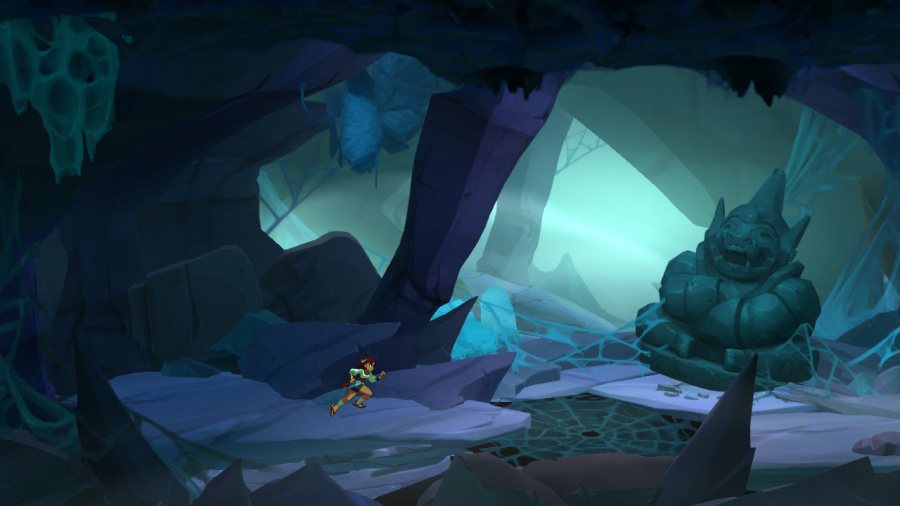 Lab Zero Games made quite a name for itself when it first came onto the scene with the launch of Skullgirls about eight years ago, where it demonstrated a remarkable penchant for smooth 2D animation and tight combat design. A few years after its success there, the studio launched an Indiegogo campaign in which it revealed its next major project, Indivisible. Billed as an RPG that would blend in elements of Valkyrie Profile and Super Metroid, Indivisible quickly accrued its campaign goal and then some, and saw its initial release on other platforms just this past fall. Now, Indivisible has (somewhat unexpectedly) made its way onto the Switch, and we can confidently say that it has been worth the wait.

Indivisible follows the story of Ajna, a fiery teenager who grew up in a remote village, trained in martial arts by her mysterious and stoic father. Life is peaceful in the village of Ashwat, but things very quickly go awry, however, when the forces of an evil warlord named Ravannavar burn down her village and kill her father. In the ensuing chaos, Ajna also discovers that she possesses mysterious magical powers, chief among them being the ability to effectively absorb other people and deposit them into a pocket dimension in her brain. Eager to avenge her fallen father and home, Ajna sets out on a journey to kill Ravannavar, though her quest for revenge very quickly begins revealing secrets from her family’s shrouded past. 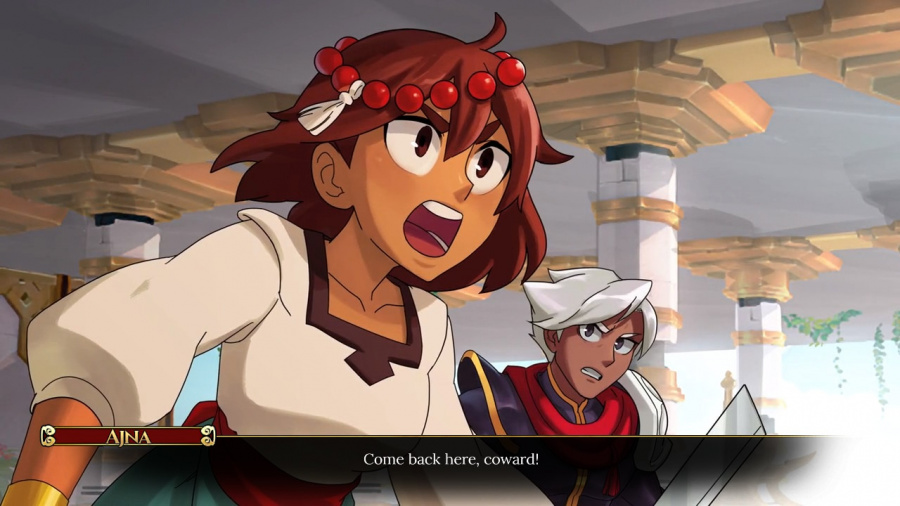 It’s a rather clichéd premise to be frank, and this isn’t helped by the sometimes lightning-fast pace at which the plot moves forward. For example—in the very beginning of the story—Ajna’s father’s introduction and death happen mere minutes apart from each other, which considerably dampens the emotional effect of the traumatic event. Moreover, the man who kills her father becomes the first “Incarnation” to be absorbed in Ajna’s brain, and she regularly talks to him with a begrudging sort of respect mere minutes after she’s just buried what’s left of her dad. To be fair, it’s easy to see how the story is often being fast-tracked in favor of putting gameplay first. Still, for a game as story-focused as Indivisible, the internal logic of the narrative is too often cast aside just because it isn’t immediately convenient.

Even so, the story remains one of the strongest aspects of Indivisible, and this is due in large part to the excellent writing on behalf of the characters. Ajna is a likeable, yet over-confident and sometimes selfish main character, and she’s surrounded by a strong cast of characters that—though occasionally one-note—each have something unique to contribute to story beats. Each of these characters are greatly boosted, too, by the near constant humor in the party interactions, which is consistently entertaining. Razmi the witch, for example, always plays the devil’s advocate and solves most of her problems by setting things on fire. Then there’s Dhar—a lieutenant of Ravannavar—who acts as the ‘Meg Griffin’ of the party, constantly the brunt of jokes and taking everyone else’s abuse. This is an effective and charming cast of characters, and with so many different personalities on display, it makes for conversations that stay dynamic and interesting. 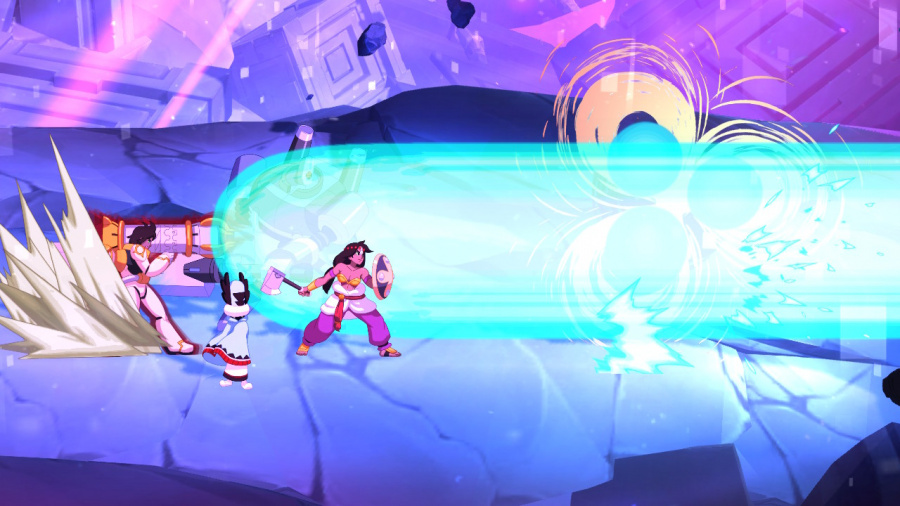 Speaking of dynamic and interesting, the battle system utilized in Indivisible strikes a fascinating balance between live action and turn-based, while also showcasing Lab Zero’s experience with fighting games. Up to four characters at a time can be on the field at once, and each has a set number of action points that govern how many attacks, heals, or other actions they can use before having to wait for a spell for their points to refill. Each character is bound to a face button, and inputting either ‘up’ or ‘down’ when you press their button can allow you to use more of their moveset. For example, when Ginseng the healer goes with her neutral attack, she pulls out her pestle and mortar and does a little bit of damage to the enemy while charging her heal. Using her ‘up’ attack, then, casts her heal while also damaging any enemies nearby.

Each character has something unique or interesting in their moveset, and judicious spacing of their abilities can lead to fights in which the enemy team can’t even get a shot in. The combat system favors juggle combos, and the player is often encouraged to try to keep the enemy in the air or otherwise stunlocked for as long as possible via well-timed attacks from the crew. Combat becomes more satisfying over time, then, as you become more acquainted with the different animation lengths for each character and the unique strengths and weaknesses they have. Considering that there are a couple dozen characters you can have in your party, there are also a lot of interesting compositions to explore and experiment with as you move forward. In short, it’s pretty tough to get tired of Indivisible’s combat, which remains constantly fresh and exciting throughout the whole 30-hour campaign via both the regular introduction of new characters and the generally fast, but thoughtful, pace. 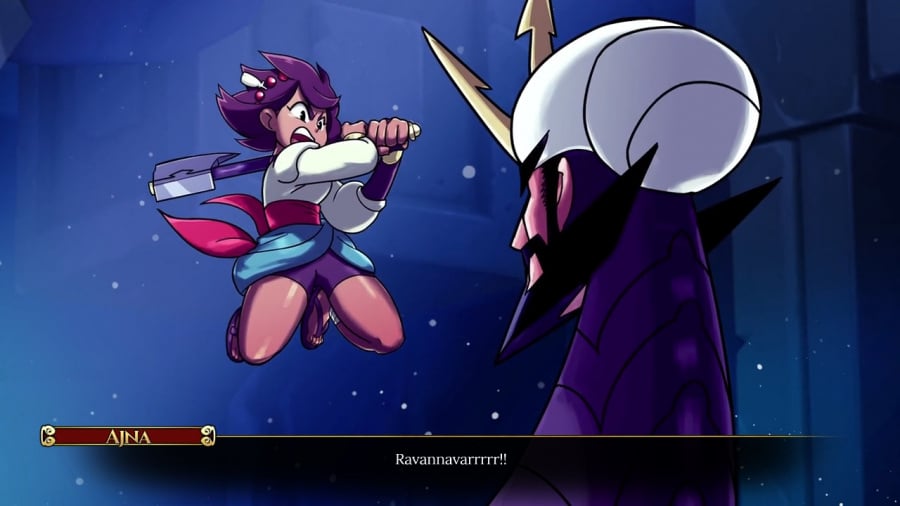 In between fights, you’ll find yourself guiding Ajna through an overworld that could best be described as Metroidvania-lite. While at first glance it might seem like there are all kinds of paths to take, the reality is that you’re following a mostly linear route for the adventure, punctuated by the occasional side path hiding a collectable. Along the way, you’re tasked with overcoming all sorts of platforming challenges, which admittedly don’t leave much of an impression. Most platforming sections are easy, but there are random spikes in difficulty every now and then which can be jarring and unpleasant to say the least. Indivisible’s platforming is never bad, but considering how you spend effectively half the game doing this, it’s a little disappointing that it comes off as feeling like a bit of an afterthought.

Speaking of afterthoughts, it also feels like the RPG elements of Indivisible are a little too toned down for their own good. Battles are immensely fun to participate in, of course, but the rewards for completing them are a little less compelling. Though you collect experience and level up, there aren’t any visible stats or notable growth gains to be seen other than HP, and the ‘heart points’ that your Incarnations gain in lieu of levels aren’t even explained to you in-game. The most noticeable progress you can make is via collecting “ringsels” hidden away in the overworld, which can be traded in to get more action points per character or bolster defense, but this is considered a separate system from your leveling up. The issue being, Indivisible often seems like it wants to be an RPG, but doesn’t really want to lean into featuring many elements of the genre. In this way, you could say that Indivisible is rather reminiscent of, say, Paper Mario: Sticker Star in that it’s ostensibly an RPG, but often feels like a watered-down take on one instead. 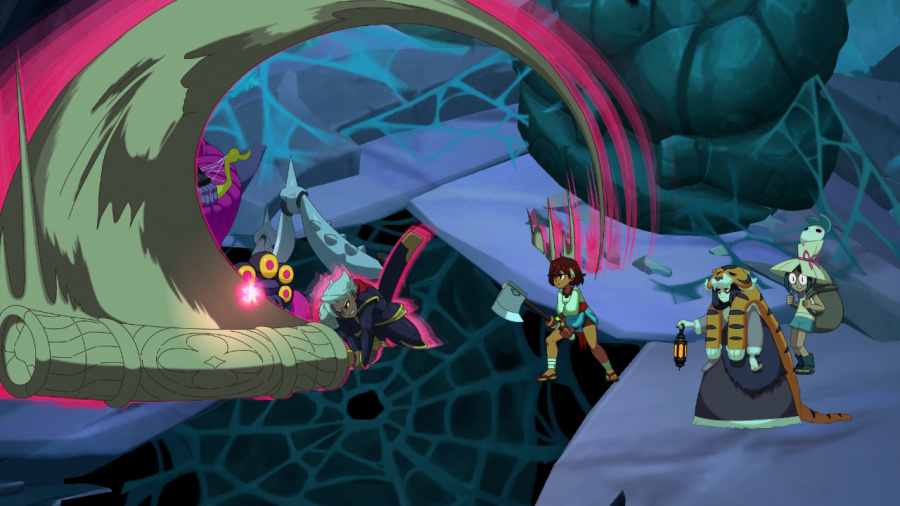 We’d be remiss to critique Indivisible without taking some time to talk about the positively fantastic presentation on offer. The Southeast Asian-inspired world you explore has a diverse series of interesting locales to see—like the stunning neon-dripping Tai Krung City—and the Shantae-esque blend of 3D environments with hand drawn 2D characters makes for an interesting contrast. Animation quality on the sprites is top tier, with there being plenty of expressive and exaggerated movements to sell the cartoon-y look of the drawings, and characters each have distinctive and memorable designs to differentiate them from the rest of the somewhat crowded cast. All these visuals are backed by a catchy soundtrack and some excellent voice acting, which elevates the character interactions substantially. There’s a sense that each of these voice actors were really getting into their roles, and that passion regularly shows through in the delivery.

Indivisible is an ambitious game, and there are moments where it seems to buckle somewhat under that ambition. The oddly-paced story, watered-down RPG elements, and inconsistent platforming indicate that this one maybe could’ve used more time in the oven. On the other hand, the beautiful visuals, excellent voice acting, great writing, and top-notch combat prove to be strong elements of an argument in its favor. Indivisible may have some rough edges, but these don’t prove to overly hinder the generally enjoyable and charming nature of this adventure. It may not be perfect, but we’d still recommend you give Indivisible a look; this one’s certainly worth your time.