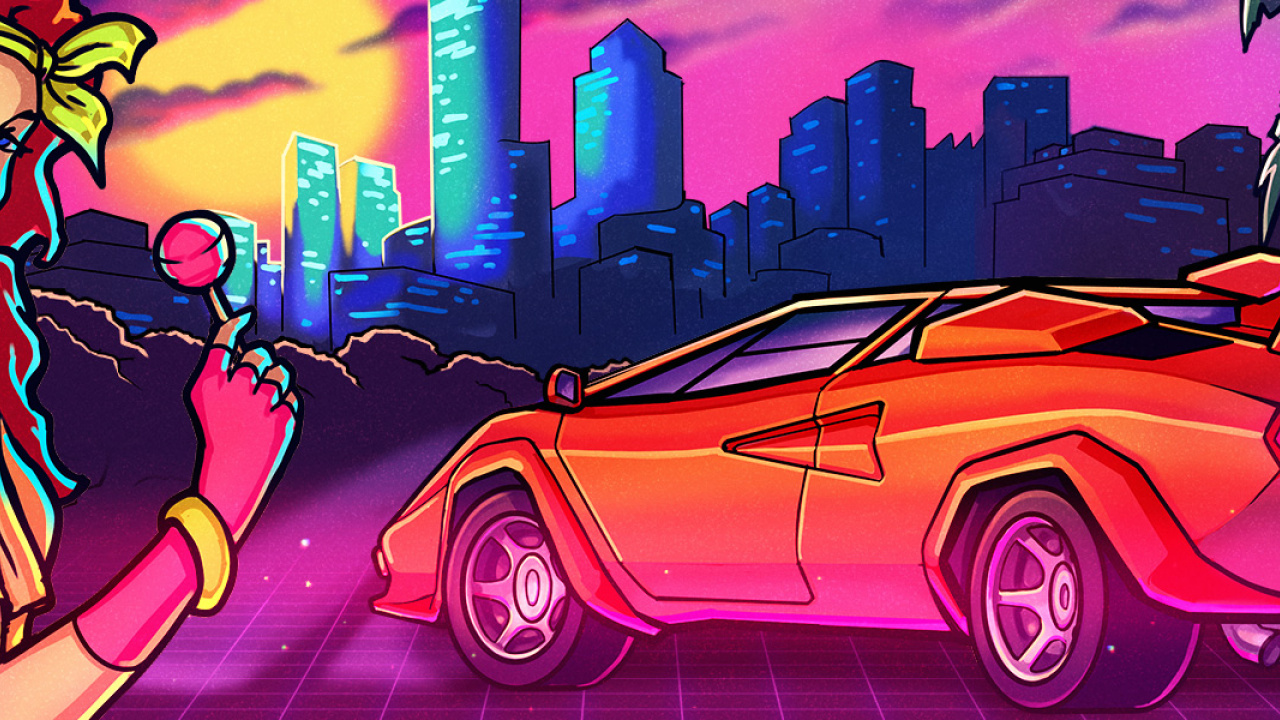 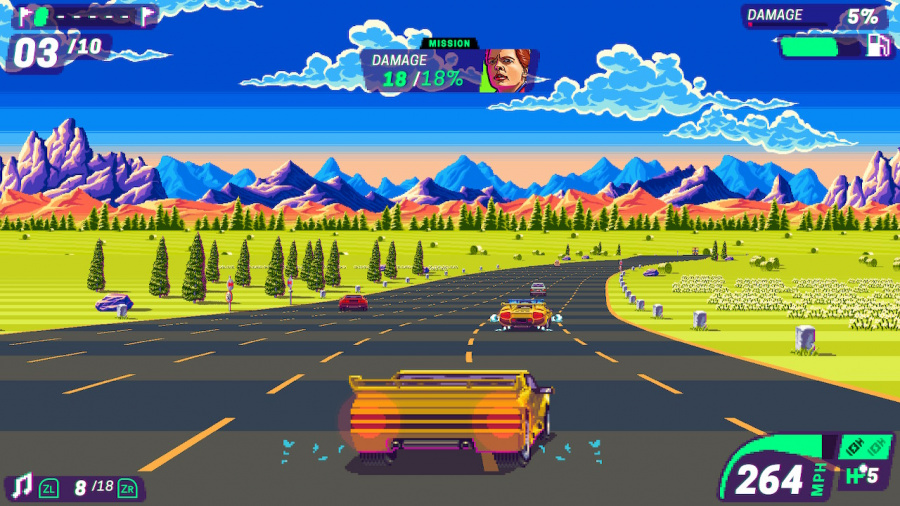 The ‘80s aesthetic is so overused these days that it takes something fairly spectacular to stand out in the crowd. To be fair to 80’s Overdrive, it originally launched on the 3DS back at the end of 2017, when things like that 3D purple sci-fi grid you see all the time now (and appears in this game too) were still considered cool. Times have changed.

In the two-and-a-half-years that have passed, we’ve all seen more than our fair share of ‘80s-style games, so this one’s going to have to play well too to justify forking out ten bucks for it. It just about manages it, but it’s certainly not without its issues – and we don’t just mean the apostrophe being in the wrong place in the title.

In case it wasn’t clear by the screenshots, 80’s Overdrive is a tribute to old-school arcade racers like Out Run, where one principle reigns supreme against all others: driving bloody fast in cool sports cars. There are initially six cars available in the game, although you can only afford to buy one of the first two when you start off. They’re all unofficial but are clearly based on much-loved cars from the era, from the Ferrari Testarossa (known as the Testosterando here) to the DeLorean (aka the De Loan). Each of them can be upgraded with earnings from race wins, with the exception of the final car – the Tensor V12 – which comes with its stats already maxed out. 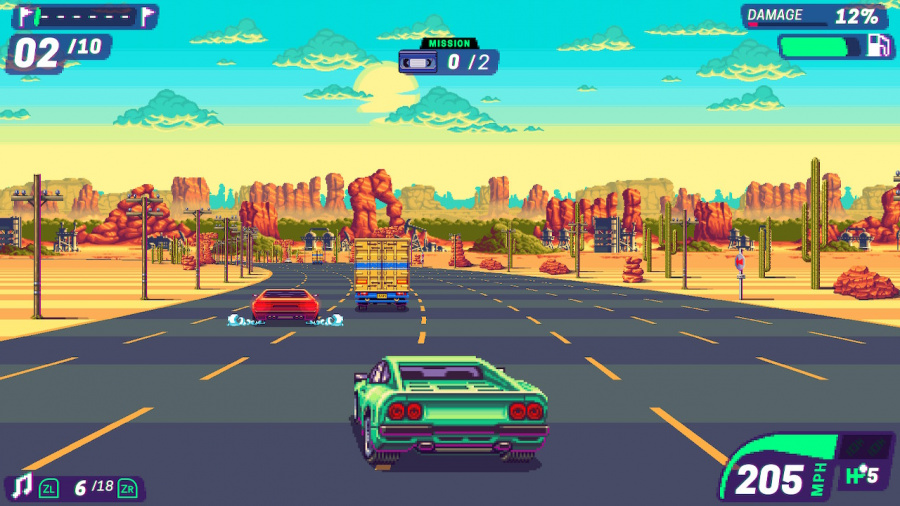 It’s clearly a pretty game. Its art style is an interesting mix of pixel graphics and 3D tracks designed to give the game a unique look that’s both modern and retro at the same time. It has eight distinct environments, ranging from the seaside to meadows to a futuristic city, and each of them looks wonderful, with plenty of roadside scenery to enjoy as you race past. It almost always runs at a silky smooth 60fps too, although on rare occasions we had issues where the forest stage – which is lined with autumnal trees – would start to chug horribly to the extent that it was really distracting.

It doesn’t just look impressive, it sounds great too. As you’d probably expect, a game like this more or less demands an electro ‘80s soundtrack and Overdrive doesn’t fail to deliver. Its 18 tracks were composed by six artists – most of them Polish, like the game’s development studio – and they maintain a high quality throughout. It’s a shame the soundtrack doesn’t appear to be available anywhere because we’d happily listen to it while driving our car in real life (while obviously observing applicable road traffic laws, of course).

That’s the audio and visual boxes ticked, then, but what does the game actually offer in terms of modes? Well, there are two main ones: Career and Time Trial. Career presents you with a series of 35 races with progressively more difficult opponents. Track length varies, as does the amount of traffic in each race and how frequent the police will appear to try and run you off the road. As you win races you earn cash that can be spent on your car: either upgrading it, repairing it, refuelling it or replacing it altogether with a shinier model. 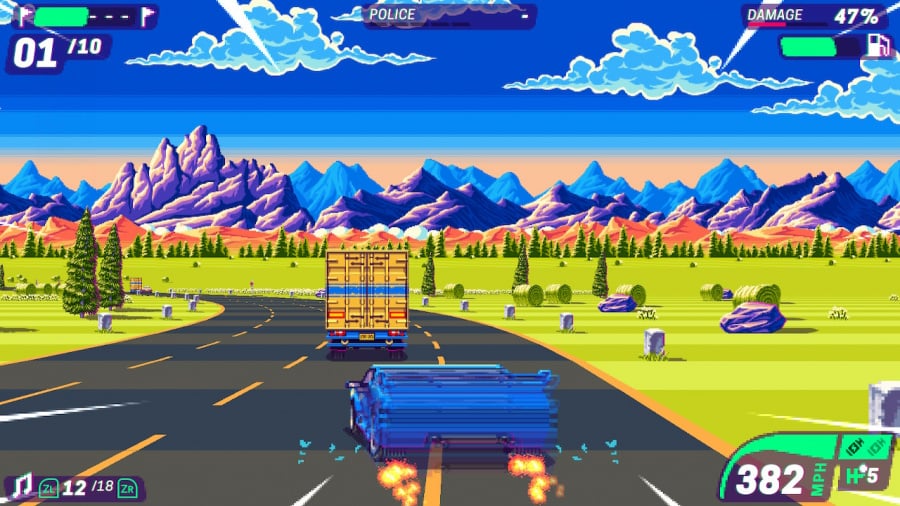 On occasion, you’ll also be given separate missions from a shady character (it’s never really revealed what his motivation is for this). If you accept and carry out these missions you’ll get a large cash bonus. Some are interesting, such as collecting certain items lying on the track while you race, or deliberately finishing in a specific position. Others, though, are a little pointless; the one that challenges you to finish ahead of a specific opponent sort of goes without saying if you’re trying to win the race anyway.

The Career mode passes a couple of hours, but your progression isn’t balanced so well. In a best-case scenario, games with similar modes try to stagger your upgrades and control them tightly enough that you’ll have earned all your upgrades just in time for the last phase; you’re rewarded for your hard work by becoming as powerful as you can be just when you need it.

In 80’s Overdrive, it’s absolutely possible to buy the fastest car (with its stats fully maxed out) by roughly the halfway stage; this not only gives you nothing to aim towards other than simply winning the remaining races until you reach the end, it also makes the optional missions entirely pointless. After all, what’s the point in taking on extra tasks to earn a big cash bonus when you’ve got nothing left to spend it on? 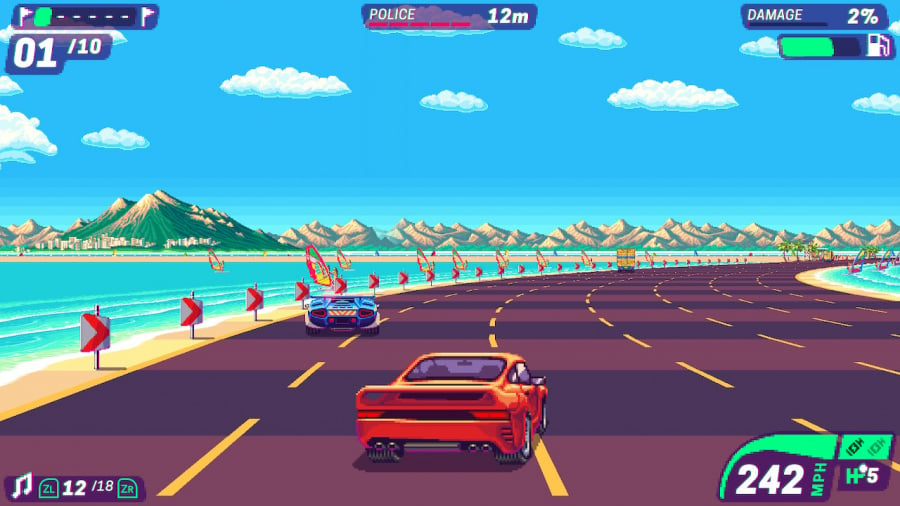 Once you’ve beaten the Career mode there’s no real reason to go back to it, so the Time Trial mode is likely to be your regular port of call from that point on. It’s similar to Out Run in that you’re given a set time to reach the end of a stage and pass a checkpoint for a time extension. Just like in Sega’s game, the track splits into two different routes at the end of each section so you can choose which landscape to race through next. Unlike Out Run, though, you can also top up your timer – and pretty much have to, really – by overtaking other traffic as closely as possible. You’ll add 1, 2 or 3 seconds to the timer depending on how closely you pass them.

It’s a fun idea designed to stop you feeling bored by nothing more than simply avoiding everything, but it does also highlight the game’s most notable flaw: the handling. Light taps of the D-Pad or analogue stick result in absolutely nothing happening: you have to hold the direction down for a while before the car starts to turn. This isn’t an input lag issue, because the car stops turning immediately when you let go and the problem is more obvious in slower cars. It’s a conscious design choice, presumably created to make the better cars feel more responsive. That said, although the delay is less blatant as you drive faster vehicles, even the super-fast hidden one you unlock for beating Career mode still has it to a degree. 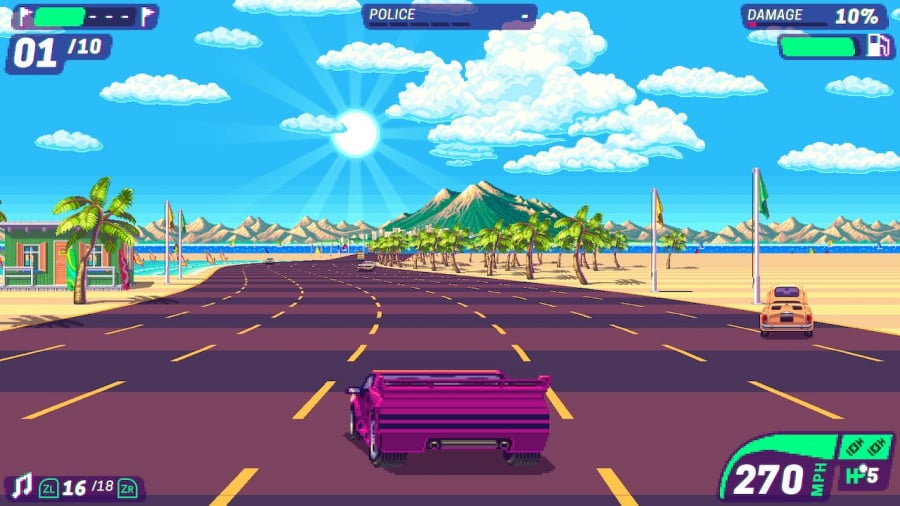 What this means in practice is that while it’s fairly easy to adapt to it in Career mode – because you’re mainly trying to give other cars a wide berth and turns are never sharp enough to demand perfect timing – it makes the Time Trial mode extremely frustrating, because you’re actively encouraged to inch closer to opponents but your controls aren’t anywhere near twitchy enough to allow this. The number of times we find ourselves reasonably close to a car, try to tap the direction to get a little closer and either don’t move at all or move too much and plough into the side of it is too large to be acceptable.

It also feels oddly slow. It makes sense that the worst car in the game would run at a lethargic pace, to encourage you to upgrade as soon as possible. Even the fastest car, however, doesn’t give the same sensation of speed as its speedometer suggests. When you’re going at more than 270mph and it feels more like you’re doing 70 on the motorway, that’s underwhelming. This, combined with the controls, results in a game that may try to look like Out Run, but just isn’t as satisfying to play.

80’s Overdrive may be wonderfully presented, but its problem is that price-wise it’s sandwiched between two similar games that are better. Sega Ages Out Run is cheaper and its tight controls remain impeccable today, while Horizon Chase Turbo may be double the price but is significantly superior in almost every notable way, including control, amount of content and sense of speed. If you absolutely need another ‘80s style racing game then this will keep you entertained for a few hours, but there are better alternatives.