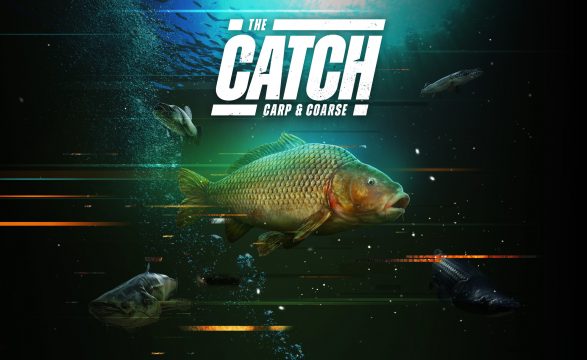 Coming from Dovetail Games, purveyors of quality fishing games like Euro Fishing and Fishing Sim World, comes a new title for all of us anglers who are gasping to be able to recreate our favourite pastime virtually. The new game – The Catch: Carp & Coarse is coming to Xbox One, PS4 and PC, and focuses on the simulation end of the fishing scale. With my excitement for this game already very high, I attended a virtual demonstration, as Dovetail spent time showing off their upcoming title.

So, first off and The Catch is all about the fish, with advanced fish AI making every single trip one to remember.

There are going to be five venues to choose from, ranging from the Scottish Loch Mickle to the Malaysian Pearl Lake, whilst we’ll also be able to spend time visiting the River Ebro in Spain, the River Meuse in Rotterdam and Oxlease Lake in England, on the famous Linear Fishery. The River venues in particular promise to be interesting, as new water flow mechanics mean that not only will your float meander off downstream, should you be float fishing, but also a boat may well drift away from the productive area you’ve found. The immersion, if you’ll pardon the pun, sounds even better this time around than even what Dovetail have previously produced in their other games – games which, frankly, take home the coveted prize of best fishing titles on Xbox One.

You can add to this many, many species of fish, and more of the returning “Boss Fish” than you can shake a landing net at. Combined, that brings the anticipation for this game up to a level that is almost more than I can bear. With 25 Boss Fish per lake, of all species, for a grand total of 125 Boss Fish to find, tempt and land, there doesn’t seem to be any shortage of content to aim at.

There looks to be a huge wealth of single player content too, including AI tournaments, fishing trips and challenges, as well as online multiplayer to go at. Yep, there will be plenty to keep us playing. There was even talk of a world league/leaderboard, with the highest scoring individuals being immortalised on social media.

Mostly though I am happy that the fish are the stars this time around, and with fish species ranging all the way from Arapaima to Zander, there’s a lot to go fishing and be excited for.

As you would expect, Dovetail Games have also made much of their links to some of the biggest, most iconic fishing brands and anglers, and it appears that all the gear that you will be able to buy is officially licenced stuff from the worlds biggest fishing brands. Add to this the usual character generator, which should enable you to make a reasonable approximation of yourself in the game, and the only question that I now need answering is when? When can we play this awesome looking game?

The 30th of June 2020 is the answer, when the game will be available on Xbox One, PS4 and PC. And all this for the bargain price of only £19.99 as well. What’s not to like? If you do need more convincing though (and I’m not sure why you would), hit up the latest Xbox One gameplay reveal trailer for The Catch: Carp & Coarse below.

Let us know what you think too. The comments are below.