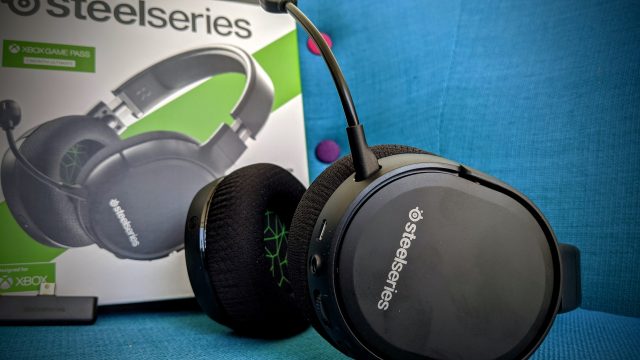 Over my four decades of gaming I’ve used a whole range of headsets. I’ve gone wired, I’ve cut the cable and utilised the magic of wireless, I’ve messed around with cheap and cheerful one-ear oddities, gone mid-range with double cuppers, and have hit the top-end, embracing the likes of Dolby Atmos support and the power of Razer Hypersense with some of the most expensive products on the market. You could say that if it’s been available, I’ve used it, exhausting pretty much all options. But then, until recently I hadn’t used a SteelSeries headset. Yet after spending a good few weeks with the new Arctis 1 Wireless for Xbox, I’ve realised I’ve been missing out on something special.

You see, I’m amazed that SteelSeries have been able to produce and market this headset for under £100. I mean, it’s that good and that impressive that I’d quite happily be paying upwards of double the £99.99 asking price that the Arctis 1 Wireless for Xbox One commands. And the best thing about it? It covers absolutely every scenario you could wish for.

The very first thing that has to be mentioned about the SteelSeries Arctis 1 Wireless for Xbox – and that Xbox mention covers both Xbox One and Xbox Series X – is the styling. Much like all SteelSeries headsets, this is a sweet looking piece of kit. All black in colouring, with just a delicate SteelSeries logo on each outer cup, and some snazzy Xbox green stylings on the innerside, these really do look the part, easily catering for those who would be looking for a pair of lifestyle cans as well as for gaming use.

The upper headband comes with adjustable steel enforced innards, with a slight bit of padding on the underside. First thoughts were that this cushioning seemed a little stingy, but in use it works brilliantly. Combine that with well-cushioned, material-covered oval earcups and comfort across long gaming sessions is never an issue here. In fact, this headset fits perfectly, hugging the head without ever delivering a compromise.

This is helped with a decent degree of swivel and tilt to the earcups, letting you find a perfect fit for all. And when you do decide to take them off for a minute or two, they hang around the neck with ease, comfortably sitting ready for action again.

Inside the Arctis 1 Wireless for Xbox are the same drivers as found on SteelSeries’ top-end headsets like the 9X, providing access to some of the most subtle of audio details to give you an advantage across the gaming landscape. They are super clear, even at full volume, and even though I’d personally like to feel a bit more bass come through, they are totally acceptable in terms of the sound delivered. Rarely have I felt wanting from anything this headset delivers.

The same is true for the mic that sorts out the outgoing sounds. Fully detachable – and this could well be an issue for some as retractable mics can’t get lost – this is a Discord-certified microphone; one that utilises a bi-directional design to ensure noise cancellation is at the fore. It sounds great too, with friends in party chat remarking just how clear communications between the team have been when using this headset. It’s been full-on plug and play too, with absolutely no need to go messing in the Xbox audio settings to find the sweet spot. Perhaps this is something that has been unique to me and my time with the Arctis 1 Wireless, but once more there has been nothing but ease of use here. The same is true in regards to the majority of button and switch placement too. With the power switch hiding away on the underside of the right earcup, everything else is present on the left – the detachable mic, the micro-USB charging port, the 3.5mm jack for when wired audio takes your fancy, the full volume control rocker and simple to hit mic mute.

The SteelSeries Arctis 1 Wireless for Xbox One weighs in at just 263 grams which, whilst not the lightest headset I’ve ever used – the RIG 400HX wins that – it’s right in the ballpark for what you are looking for from a headset; light enough for everyday use no matter what you are using it for. And whilst it shines when connected up for the toughest Xbox One gaming sessions, using it for audio entertainment away from Xbox is more than possible too, with the styling letting you head out and about with this attached. In fact, all you’ll need to do to set things up and move away from Xbox to Nintendo Switch, or laptop or mobile phone, is to unplug the USB-C adapter, switch the little switch from Xbox to USB and plug it in to the device of your choice. It’s really that simple and that easy to use. Throw in the promise of 20 hours of battery life coming from SteelSeries – a figure that I’m happy to acknowledge – using these for all your audio needs is most certainly a possibility.

On the whole, the SteelSeries Arctis 1 Wireless for Xbox One is a stunning headset. But there are a couple of little things that could possibly be better – after all, nothing is perfect in life. Firstly, even though the unique 2.4 Ghz lossless, lag-free, wireless connection between headset and console (and mobile phone, Nintendo Switch and laptop for that matter) via the included adapter is super solid, it does at times prove a little tricky initially establishing that connection. On a few occasions I’ve fired up my Xbox, switched on the Arctis 1 and found little in the way of audio. It’s taken a power down of the headset and a retry in order to let the connection flow. Is this really a game killer? Nah, but it’s occasionally frustrating.

The same goes for the power switch itself. This is not just used for turning the headset on and off, but also for answering phone calls and controlling music, with one, two and three pushes pausing, skipping and going back a track. In terms of the on/off function, it all works well, however it’s also a fairly small button, one that is super flush with the outer unit. This obviously ensures clean sleek lines for the right cup, but it also means that it is sometimes tricky to find immediately, with a bit of a fumble required before you really manage to pick the button out. Just a small bit of prominence would have been preferred here.

Other than that though, everything about the SteelSeries Arctis 1 Wireless for Xbox One oozes quality. It’s obvious that a huge amount of care to detail has gone into the creation of this headset, and whether you are using it exclusively with your Xbox One, or also utilising the small USB-C adapter for the likes of Nintendo Switch gameplay, or audio through a mobile or laptop, it really does nail things. Personally, perhaps a little more bass would be nice, but no matter whether you are just kicking back for the night or powering the volume up to 11, this delivers.

Again, I’m really not sure how SteelSeries have done all this for less than £100. In fact, if you’re looking for a headset around that price, the Arctis 1 Wireless for Xbox is the new king; the new audio champion; the new ruler of the Xbox mid-range headset landscape. And I also think that it’s with the Arctis 1 Wireless for Xbox where a new love affair with SteelSeries takes hold.

If you wish to pick up the SteelSeries Arctis 1 Wireless for Xbox then you should pay Steelseries a little visit. Tell them we sent you!