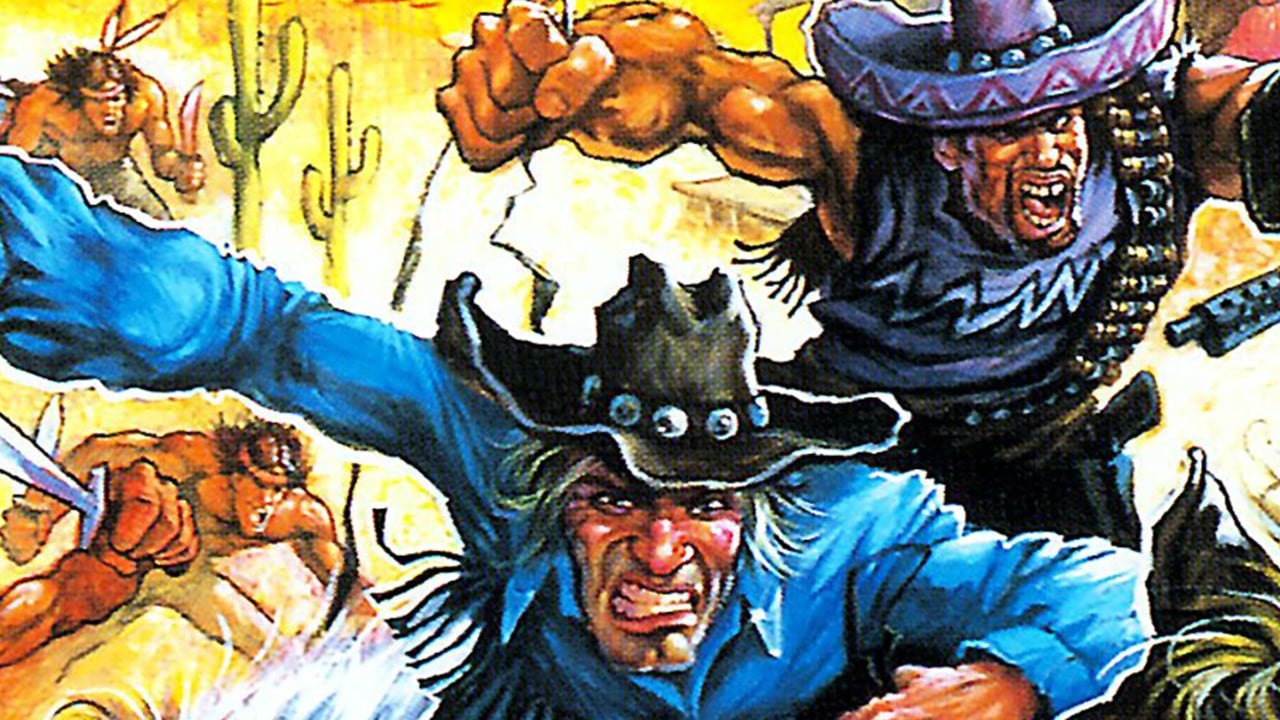 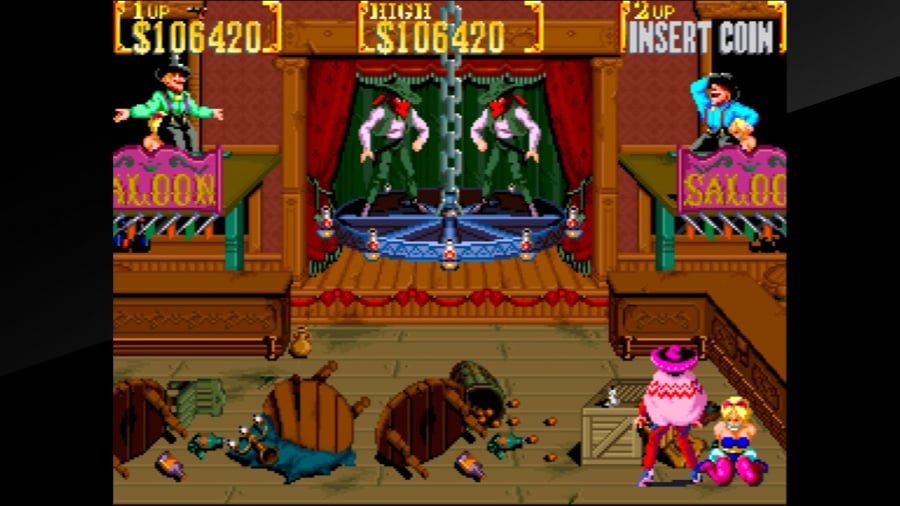 Well, it’s about time. Not officially available anywhere since making its arcade bow (outside of the well-intentioned but obviously weaker home ports on the SNES and Mega Drive, at least), Konami’s phenomenally good Western-themed run n’ gun Sunset Riders has finally been re-released as part of Hamster’s superb Arcade Archives line. The arcade original almost hit Xbox 360 as part of its ill-fated Game Room line, but this is the first time the original arcade version of Sunset Riders has been playable at home – short of buying your own cabinet.

And what a treat it is. One of Konami’s best games ever and produced at the height of the company’s powers, Sunset Riders is a multiplayer blast through a world inspired by the Spaghetti Westerns of yore; we’re talking cowpokes, saloons, can-can girls and a fistful of dynamite. We were a little surprised that Sunset Riders has made it to the Switch in an unedited form, given its cheerfully un-PC genre pastiche and stereotyped characters such as Chief Scalpem and Paco Loco – but here it is, all present and correct. 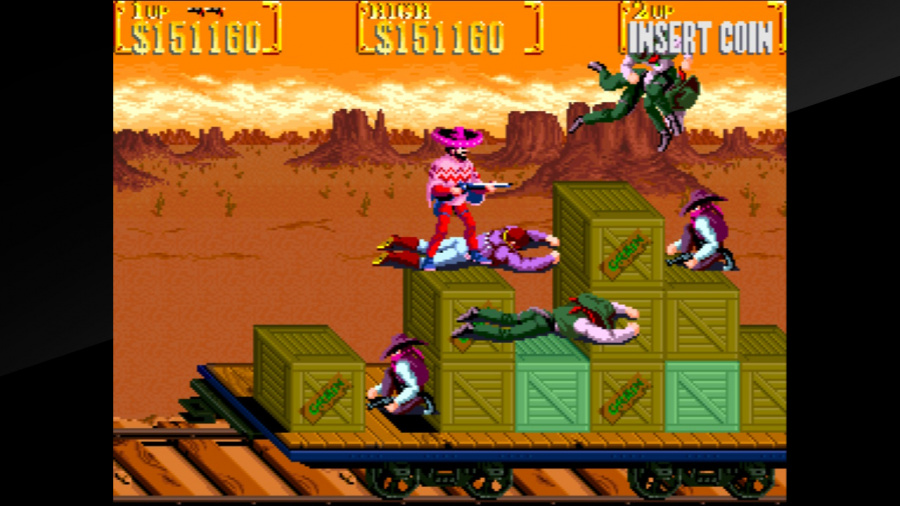 Four versions are available here; the Japanese two and four-player versions, as well as the equivalent worldwide cabinets. The differences are negligible, but whichever one you pick you’re going to have a good time. Choosing from four different characters – each with marginally different weapons – you’ll head out across the American frontier, unloading round after round into a constant stream of enemies as you search for your bounties.

Each stage sees you up against a different outlaw, and each of them is brilliantly memorable. Highlights include Simon Greedwell (who spouts the game’s iconic “Bury me with my money” catchphrase once defeated), The Smith Brothers (one of the era’s greatest boss battles) and final antagonist Sir Richard Rose, but every boss battle in the game is superb and full of neat, creative touches. Most importantly, each requires a different set of tactics in order for the player to succeed.

Set pieces are varied and exciting, seeing your chosen vaquero run atop a herd of stampeding cattle, ride on horseback alongside a thundering steam train, or ascend a mountain to reach a Native American chief’s settlement. It’s concise to a fault, with no level outlasting its welcome and the difficulty pitched surprisingly reasonably for a coin-op game; interestingly, the SNES port back in the day was actually more difficult in places. It’s tough to get through unscathed – and the bosses have plenty of tricks up their sleeves – but it’s eminently doable, which is refreshing in the often painful world of arcade gaming. 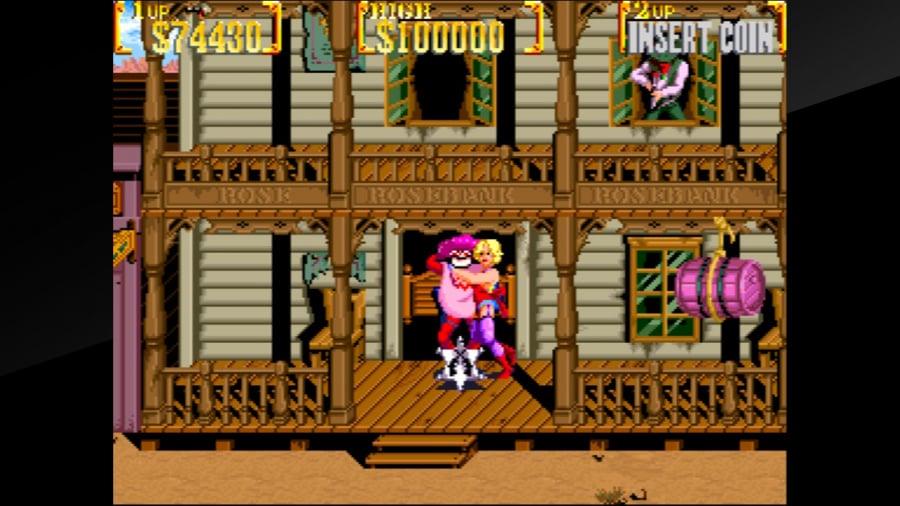 Getting around is a breeze, and your character and their world are pretty versatile. As well as the expected eight-way shooting, you’re able to execute a slide manoeuvre and leap from ground to the upper level of a stage, ala Shinobi (which recently saw a Sega Ages Switch release itself). You can enter saloons to get power-ups and scramble across suspended ropes hand-over-hand, flipping yourself up and over them to dodge bullets. Enemies are dynamic in their pursuit and they’ll emerge from windows to take potshots, or run on-screen to hurl a stick of TNT at you – which, naturally, you can throw back at them. Additionally, there are plenty of gimmicks to interact with, such as hanging barrels you can shoot down to squash your opponents flat, or mounted Gatling guns you can use to break through fortified doors later in the game.

The rousing, orchestra-hit-filled soundtrack (from Snatcher composer Motoaki Furukawa) fits perfectly with the gorgeous, expressive graphics; these brilliantly blend the Hollywood Western style with a frisson of pure anime, resulting in a consistent, characterful experience that never betrays itself. It’s the Saturday morning cartoon that never was. These aesthetics combined with the rollicking pace of Sunset Riders provide an instant and mostly sustained adrenaline rush.

In what’s largely a flawless piece of work, it’s a shame that they threw in a tedious bonus round – it’s not as though the game needed livening up and it’s a pretty dull way to earn extra points. Taking the form of a first-person shooting gallery, you simply angle the stick towards the enemy cowboys as they pop up in sequence, then hit the fire button. It isn’t fun, and even at just a minute or so it goes on for too long. It’s just a couple of brief interludes, but they’re entirely unwelcome when you just want to get back to the good stuff. Speaking of which, roping in a second, third or even fourth player turns this into one of the most amusing party games on Switch – and it’s not even a party game. 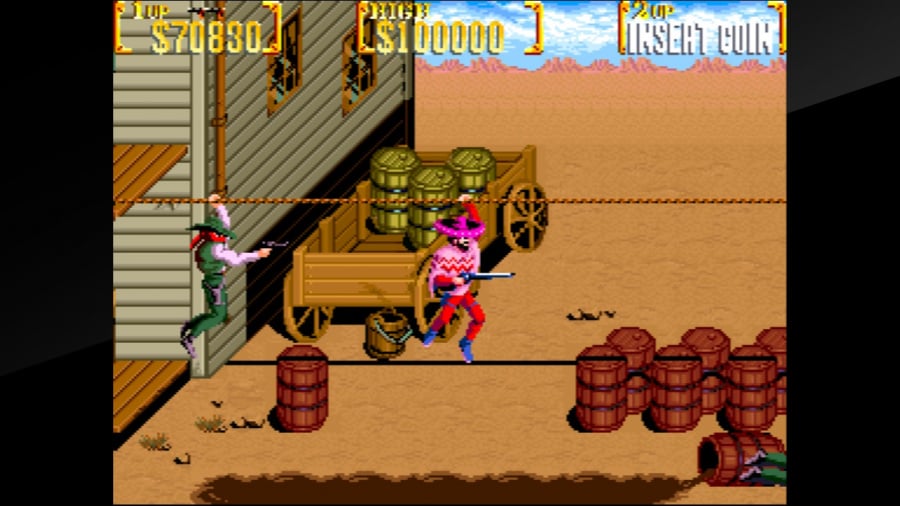 That’s really the only criticism we can level at Sunset Riders, though; it’s one of the best games Konami ever made, finally available in the typically faithful Arcade Archives manner. As usual for this line, the extras are limited to checkpoint saves, leaderboards and dipswitch options, but you’re here for the game. And what a game it is. Unlimited continues mean you can brute-force your way through the entire game if you’re particularly weak-willed, but we’d strongly advise against that – limit yourself and you’ll find a challenge that only grows more enjoyable the better you get.

Sunset Riders finally gets its due as this beloved arcade classic hits Switch with a bang. It’s nothing but pure side-scrolling boss-blasting fun, the likes of which are often imitated but never quite captured. There’s a reason so many people remember this game so fondly; it’s got personality to spare. One of the greatest games that Hamster has deigned to release and as far as we’re concerned one of the crown jewels of Arcade Archives. Can we have the spiritual sequel Mystic Warriors next, Hamster? Please?