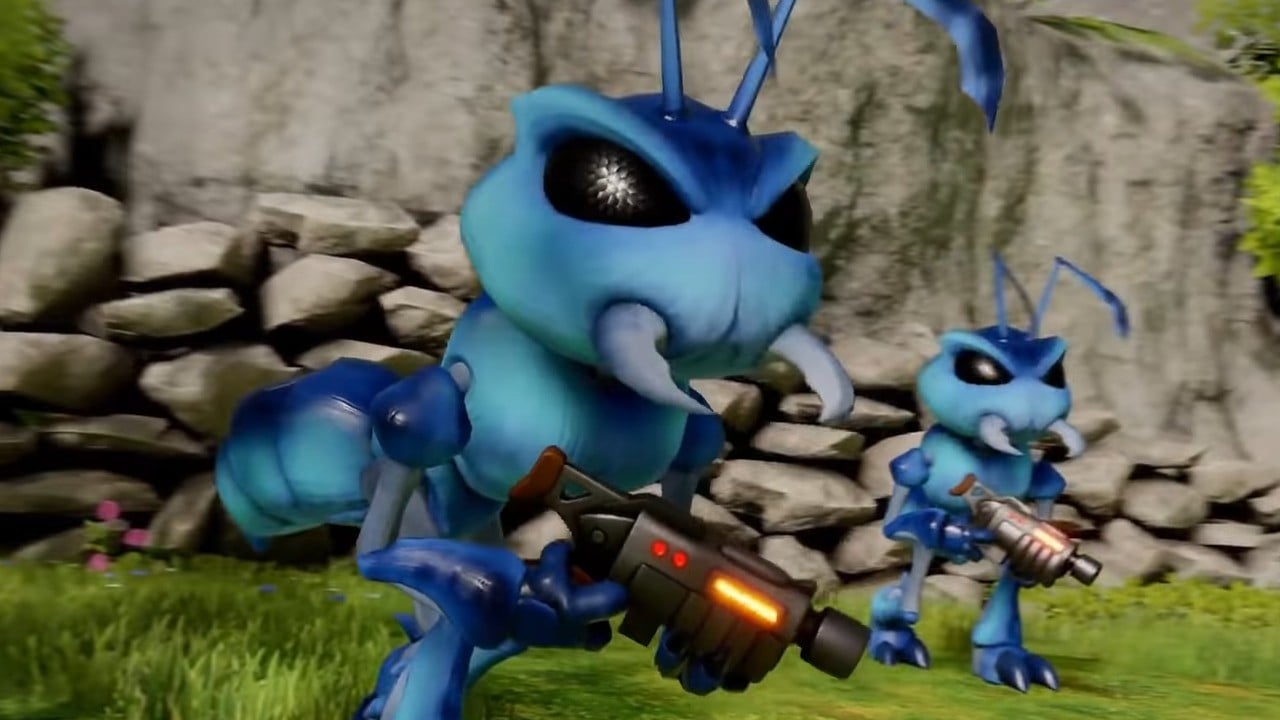 Don’t let the cute and cuddly look fool you, the upcoming PS4 and PC release Tamarin has ties with ex-Rare veterans. It’s got character designs in it from Banjo-Kazooie creator Steve Mayles, a soundtrack from Donkey Kong Country composer David Wise and reportedly “many other developers” from Rare’s golden era helping out.

The player takes control of a monkey-like creature on a quest to save their family from evil alien insects (and save the day in general), by splattering everything in sight (well bugs, mostly). Here’s a brief rundown:

Explore an incredible interconnected 3D world, brimming with primate platforming and bug-splattering shooter action. Leap with the agility of a tamarin as you journey into the Northern wilderness on scenic routes through forests, fjords and mountains. Along the way you will chase mysterious electrical fireflies, discover a secret underground world of dancing ants, rescue innocent birds, and restore the tamarins’ once idyllic natural habitat.

In the words of IGN’s deputy editor Tom Marks, it’s basically a “successor” to Rare’s 1999 third-person shooter Jet Force Gemini on the Nintendo 64.

JET FORCE GEMINI SUCCESSOR WITH FORMER RARE DEVS BEHIND IT.

I REPEAT: JET FORCE GEMINI SUCCESSOR. THIS IS NOT A DRILL. https://t.co/rrUMXHA2p2

The bad news? There’s no guarantee it’ll come to the Nintendo Switch. According to the official Chameleon Games FAQ (the small developer behind this release), if a Switch version did happen, it would apparently take a very long time:

Since we’re a small team, our hands are currently full with the PC and PS4 versions. We can confirm that the game is now in development for Xbox One. For technical reasons and because development started long before Switch was out, a potential Switch version would take a long time.

Over on Twitter, Chameleon has also made it pretty clear that at the moment, there is “no Switch game to wait for”. YouTuber Doctre81 probed the developer a little more after calling for a Nintendo port and managed to find out the following information:

Hey, yea, good idea, but not very easy, would’ve been nice if there existed a button that does that!— Chameleon Games (@chameleon_games) August 30, 2020

Later on in the conversation, the Chameleon Games Twitter had a change of heart:

We do like Nintendo and the Switch. Let’s see what happens in the future (#NintendoSwitchpro?), thank you.— Chameleon Games (@chameleon_games) August 30, 2020

In other words, there’s still some hope, just don’t expect it to show up on the Switch next week. Would you like to be able to play this game on your beloved hybrid system? Have you always wanted a follow-up to Jet Force Gemini? Tell us down below.